I cannot integrate IDM into FireFox. What should I do?

Download panel for video is not shown or shown in some wrong place. What should I do?

I have just updated FireFox to its newest version and IDM integration into FireFox stopped working. IDM does not take over downloads from FireFox anymore. What can I do to fix it?

FireFox said it had disabled the IDM extension because it wasn't compatible. How do I resolve the problem?

2. Please check that integration into FireFox is enabled in "Options→General" IDM dialog:

If it is already enabled but integration still does not work, possible solutions are:

3. Problems with IDM extension for FireFox 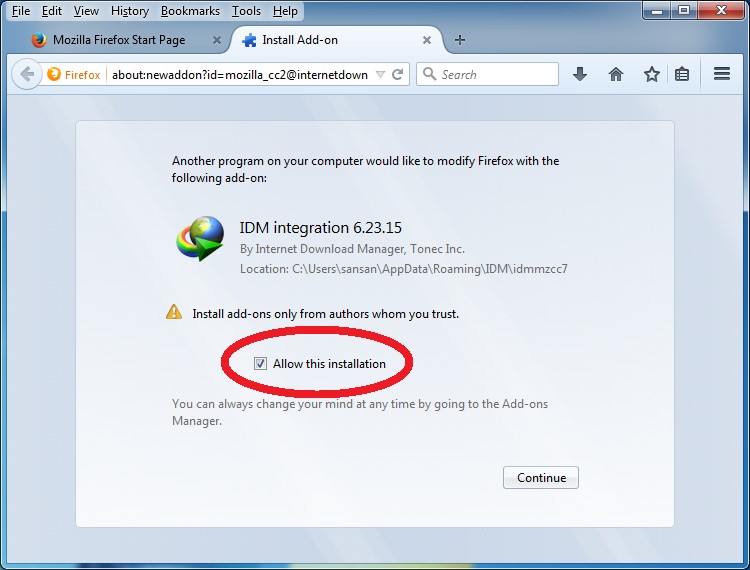 You need to check "Allow this installation" box on the dialog above.

Maybe you did not pay attention to this dialog during FireFox restart and did not enable IDM integration add-on.

It's possible that you need to update IDM extension for FireFox. Use "Add-ons" ("Tools→Add-ons" for old versions) FireFox main menu item.

3.1. If "Remove" button ("Uninstall" for old versions of FireFox) is available (arrow 2 on the image above), press this button and confirm deinstallation. Then close and restart FireFox browser. On next start, FireFox will find and install the latest version of IDM CC extension automatically using system registry.

3.2. If "Remove" button is not unavailable and if you are using the latest version of IDM and the integration does not work, it's possible that you use an old version of IDM extension. In this case open this web-page in FireFox browser in which you need to integrate IDM into and then press the button below:

Please follow installation instructions. If you face any problems or have any difficulties with the manual installation, please read detailed instructions on the next page.

3.3. If IDM integration is disabled, you will need to enable it and restart FireFox:

Please note that because of global changes in FireFox 40, we had to make a new add-on for FireFox with a new ID. The old version of add-on had "IDM CC" name, while the new version has "IDM Integration" name. The new version (IDM integration) supports all FireFox browsers from version 27. The old version (IDM CC) supports FireFox browser from version 1.5 to version 26 inclusively. Note that IDM distribution has both versions of add-ons inside of it, and it's possible that in FireFox settings in the list of extensions you may see both IDM add-ons, the old (IDM CC) and the new one (IDM Integration).

It can be possible when IDM finds records in system registry about an old FireFox browser (including Aurora, or WaterFox), which are installed and can be used on your computer. Also you may have different 32 bit and 64 bit FireFox versions. For example you stopped using, or stopped updating 32 bit version, but actively use 64 bit FireFox version. And conversely if you use an old FireFox and when you restart it, it will have old extension enabled and new extension disabled. If you don't use your old version of FireFox, you may uninstall it, and then you can re-start IDM using Tasks→Exit menu item, and restart new version of FireFox. After that old "IDM CC" extension should disappear from FireFox settings. Also please note that when you see both IDM extensions (add-ons) in FireFox list of extensions, and one is disabled while another is enabled, there is nothing wrong with it and you should leave it as it is.

6. If it still does not work, please please read additional instructions here.